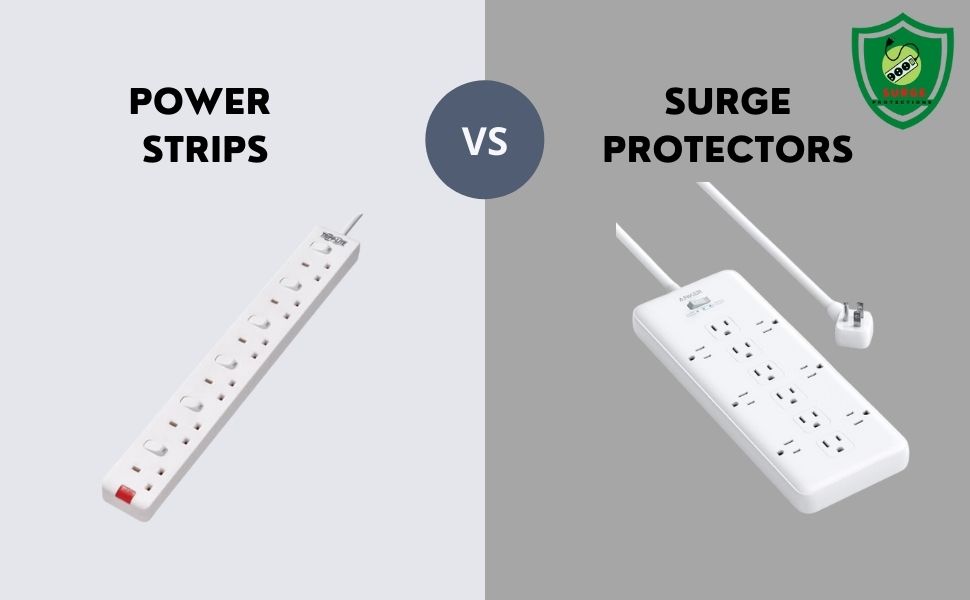 If you are a homeowner or a business owner, you might have heard of power strips and surge protectors somewhere. Basically, electricity has so much influence and useability that every one of us needs this kind of device. Anyone in the market for additional electric sockets can tell how big this debate is. Consumers are confused about wheater to choose surge protectors or power strips. So, let power strip vs. surge protector begins.

What is a Power Strip?

It is a device you might have seen hundreds of times already. A power strip is basically a cable with some outlets at one end and a plug at the other.

One side of the power strip is plugged into the socket, and then power your devices at another end. In simpler terms, it multiplies your single electric outlet and turns it into several other power outlets.

After all, who doesn’t love extra power outlets? A power strip is present in many places.

It is due to getting more power sockets to plug more devices into sockets. A standard wall plug offers two sockets — so what happens when you want to plug three devices? That’s where the power strip comes in.

Excessive Burdening of a power strip:

Plugging too many devices into the power strip can cause overloading of the strip and result in overheating electric failure, or even a short circuit fire.

What is a Surge Protector?

The idea of surge protectors might be confusing for people who heard it the first time. A surge protector is a device that protects your device by redirecting the excessive electric surge into the ground. A surge protector has multiple outlets on it. It means it can work as a protective power strip.

Surge protectors are more expensive than the default power strips because of the specialized circuit that blows itself when excessive current flows.

So here is the first argument of power strip vs. surge protectors.

Answers to some queries before getting into power strip vs. surge protector:

These are some general FAQ’s need to be addressed.

What really are electrical power surges?

All electrical devices require a steady stream of power all the time. When there is a disturbance in this steady flow of current, a surge occurs. They occur when a big appliance turns on, or there is a thunderstorm out there, or when the electric transformer is hit by something, etc. The power delivered by your authorities is not always smooth. Any of these conditions can disturb the flow of power in your house.

Surges can vary with their frequency and impact. Big surges occur during lightning strikes and are often irresistible. It can destroy, melt, or malfunction your device.

Small and Low-impact surges will also damage things over time. The internal mechanism of devices degrades over time due to continuous small surges.

Surge protectors can protect you against all big and small surges.

Which devices are at continuous risk of surges?

All. Yes, all devices that are connected with electricity are at continuous risk of being burnt out by surges. Things like T.Vs, ovens, computers, washing machines, dishwashers, etc are all sensitive to power surges.

All these things will cost you thousands of bucks. This shows how much important a power surge really is. Investing a few bucks in a suitable device will save your greenbacks.

But that will happen when you choose the right one between power strip vs. surge protector.

There are some main factors on which we would discuss the contrast: Power strip vs. surge protector.

Functionality is one of the crucial factors in the comparison between both devices. Surge protectors are the protective cord that turns down excessive voltages into the ground and protects your device, while the power strip gives some length and a couple of extra outlets for your devices to plug in.

Both devices look similar but can be differentiated by their packings. Surge protectors have a joule rating number on the box while the latter one doesn’t have any of this number.

The level of protection is the biggest factor between surge protectors and power strips. Always keep in mind that the power strip offers no additional protection against the surge. It means if a heavy surge occurs, the expensive gaming pc you loved the most gets fried and destroyed.

Power strips only offer multiple power outlets for more and more devices to be connected but up to a certain limit. Surge protectors on the other hand offer full protection against all big and small impacts of surges. They have a metallic oxide circuit in them which tackles the bad current and puts it down into the ground.

If we conduct a price comparison between these two devices, then the power strip is relatively affordable. A reasonable power strip costs you around 20 bucks. If your only purpose is to have more power outlets, then this is your device.

Surge protectors are not expensive either. Their price varies according to their capacity to bear bigger surges. You can find a surge protector with a low joule rating value for under $20.

Which is better? Power strip vs. Surge protector.

As you probably comprehended by now, there is no projection between these two items. If you have sensitive devices and you want some additional protection against all-electric surges, then go for surge protectors as they have better offerings.

But if you only want to just invest in some extra power outlets and you are O.K with the protection, then buy a power strip. We recommend that you should invest in a surge protector. We have multiple reasons.

After reading the above content, knowing where to place a surge protector or a power strip will not be a big deal for you. As a result of being well-versed on the topic of power strip vs. surge protectors, you can make more informed decisions while taking the best care of your devices.

Above are all reasons and facts about which one is better. The decision is up to you. At last,

A simple upgrade can upgrade the protection of your life.